Multiple lesions of actinic keratosis on the scalp.

Lesions of actinic keratosis are typically ill-marginated, erythematous, scaling, and rough papules or patches. These will typically be found in areas displaying other signs of solar damage, such as atrophy, uneven pigmentation, and telangiectasias.[1]

In table above, each top image shows recommended lines for cutting out slices to be submitted for further processing. Bottom image shows which side of the slice that should be put to microtomy. Dashed lines here mean that either side could be used.

1(a). One of the first clues to the diagnosis of actinic keratosis at scanning magnification is the discontinuity of the parakeratosis as the dysplastic process spares adnexal structures. Note the lack of parakeratosis over the sebaceous gland. This specimen also demonstrates dense dermal elastosis.[1]

By definition, actinic keratosis is confined to foci within the epidermis.[1]
it also generally has:[1]

Main differential diagnoses and their characteristics:[3]

Once a diagnosis of actinic keratosis is established, optionally characterize the degree of atypia into either mild, moderate or severe. 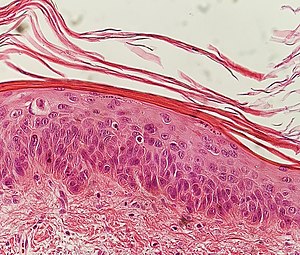 Example for the case in "Further workup":