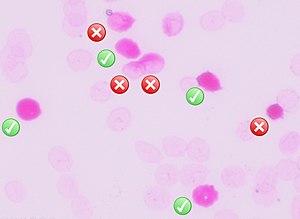 KB stain with green marks at cells counted as fetal (HbF) cells, and red marks at incompletely colored cells at top and a too small cell at right.

A fetal blood cell should be:

This is done for Rh-negative mothers, with the following main indications:

10HPFs (in 40x) are scanned, and fetal RBCs are counted (cells per 10 HPFs, not average per HPF), and classified as:

This is done for Rh-negative mothers to estimate the number of Rho(D) immune globulin vials to administer.

Assuming that a vial of 300 micrograms of Rho(D) immune globulin will protect against 30 mL of fetal blood, the number of vials needed to compensate for the fetal-maternal transfusion is calculated as following, rounded up,[1] or rounded to the closest full number and then adding 1.[2]