Peritoneal loose bodies may be found in the peritoneal cavity, and are generally caused by torsion and autoamputation of an epiploic appendage, which eventually becomes embedded in a fibrous capsule.

To separate the thoracic from the abdominal package: 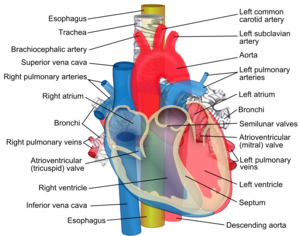 Wischnewski spots of the stomach are associated with hypothermia.[4]

For the liver, pancreas and spleen, sectioning preferably goes almost but not fully through each organ, so as to keep the slices together.

Cultures for microbiology are indicated in the following cases, if less than 24 hours have passed since the time of death:[notes 8]

The order of the sections may vary.[8]

(Foramen ovale is closed.) ((The ductus arteriosus is obliterated))
The coronary arteries ((arise in normal position. The coronary ostia are << patent {{partially occluded by arteriosclerotic calcification}}>>. They)) have << no / mild / moderate / severe >> {{and partially calcified}} arteriosclerosis. They are traced, ((throughout their length by transverse sections)) {{after fixation and decalcification}} <<without significant constrictions.{{ / The lumina of the left anterior descending, right coronary, and left circumflex coronary arteries are _%, _%, and _% narrowed, respectively.}} [[If the degree of stenosis on microscopy sections of coronary arteries only differ slightly from the gross description, preferably write "mild/moderate/severe atherosclerosis consistent with the gross inspection."]][notes 9]

The liver surface is <<smooth ((and glistening)) {{/deformed by small and large nodules}}((, and is <<light tan / dark brown>> in color)). << Normal/ {{/ firm}} consistency. Cut surface[notes 10] is normal / << (shows normal homogeneous brown parenchyma) / {{Yellowish color, indicating steatosis}} / {{dark nutmeg similar paths, indicating congestion}}. (No focal changes.)((The liver edge is _cm below the right costal margin.)) The gallbladder has (regular size,) thin walls ((lined by a velvety green mucosa)). It contains {{__ number of gallstones measuring up to __ mm. Otherwise}} normal bile ((of about ___ ml [[or cc]]. No tumor or gallstones.)) {{Mild / Moderate / Severe cholesterolosis.}} ((The gallbladder serosa is smooth.)) Further information: Gallbladder The (extrahepatic) bile ducts are open(, ordinary and without gallstones in the lumen).
The pancreas has normal size (and shape, measuring __ )[[dimensions or weight]]. Cut surfaces[notes 10] are normal((ly tan and lobulated, without bleeding or definable focal changes. The main pancreatic duct is patent.)). 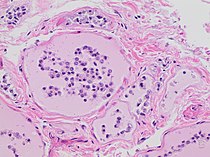 Thyroid parenchyma with autolytic changes, with thyroid follicular cells sloughing off into the follicles. It does not need mentioning in the report (unless severe enough that further evaluation impossible).

The standard reference range reference is duplicated because of technical reasons by being included in Patholines:Templates.
Retrieved from "https://patholines.org/index.php?title=Autopsy&oldid=4772"
Category: