Difference between revisions of "Brain autopsy"

Sample from the pituitary if it protrudes above the sella turcica. Further information: pituitary 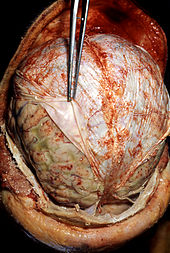 Brain with: The dura is retracted to show leptomeninges with edema and multiple small hemorrhagic foci.

Gross pathology of a brain after sectioning, showing a normal brain with the cerebrum cut in coronal sections, and the cerebellum, pons and medulla cut in horizontal sections. Standard sections for microscopic examination are annotated.

(Take samples for microscopy from:

Look for any hemorrhage, tumor, metastatic disease, vasculitis or infarction. 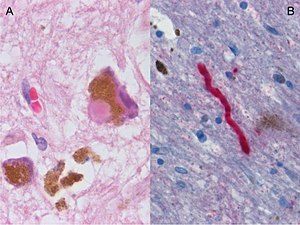 In people over about 60 years of age, or in a history of suspected Alzheimer's disease, look for its main signs in the hippocampus: 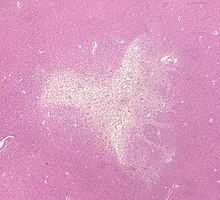 A lacunar infarct in the thalamus.

Look for lacunar infarcts, which are most common in the deep nuclei of the brain.[6]

Attempt to estimate the age of any infarct. Also look at blood vessels for thrombus or stenosis.

A more detailed chronology is as follows:[9]