Difference between revisions of "Esophagus"

On esophageal biopsies, look at least for esophagitis: 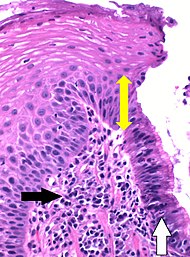 Example report with signs of reflux: