If a suspected malignancy is present, generally check the patient history for any history of cancer, especially for tumors in more common metastasis sites, which mainly include lung, bone, liver and/or brain. In case of such history, preferably look at the microscopy slides of the past cancer to help determining whether the current case is of the same origin, versus a primary at the current body location, versus a metastasis of yet another location. If there is no known history of cancer, still consider a metastasis of unknown primary origin, especially for suspected malignancies in lymph nodes, liver, lungs, bones, or skin.[4]
Further information: Metastasis

Evaluate specifically by location when possible:

An initial panel of cytokeratin (CK), S100, vimentin and LCA (CD45) can be used (see source article for subsequent work-up).[6] 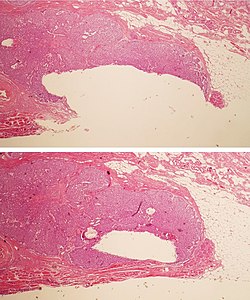