Rifts on the adventitial side that are consistent with surgical trauma need mentioning only in tumor cases.

Pathology trainees that find an unsuspected tumor should generally notify a senior before continuing. 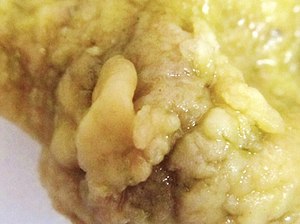 Gross pathology of gallbladder carcinoma, with a prominent nodule.

The gallbladder and biliary tract may be cut open from either end:

Look at least at the epithelial lining, for atypia and inflammation (such as edema and inflammatory cells, Further information: cholecystitis ).

For cancers, generally include a synoptic report, such as per College of American Pathologists (CAP) protocols at cap.org/protocols-and-guidelines.