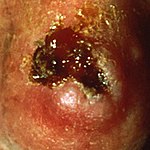 Squamous cell carcinoma in situ (essentially synonymous with Bowen’s disease) often presents as an erythematous, well-demarcated, scaly patch or plaque, with a fairly irregular border. They occasionally present as dark skin focalities, especially when found in the genital region and the nails.[1] 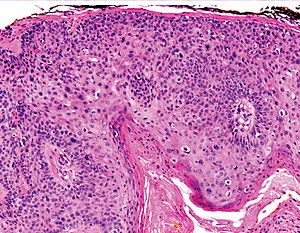 Main characteristics of squamous-cell carcinoma regardless of location.

In SCC in situ (Bowen’s disease) the epidermis will show:

Yet, a high prevalence means a relatively high incidence of borderline cases. In such cases, look particularly at the surface and attempt to classify as either of the following:

In SCC, look for any perineural invasion,[note 5] and at least a quick glance for any vascular invasion.

Perineural invasion is defined as tumor in close proximity to nerve and involving at least 33% of its circumference or tumor cells within any of the three layers of the nerve sheath (epineurium, perineurium and endoneurium).[8] First look along the border of the tumor, followed by surrounding tissue, and if still not found, look through the rest of the tumor area as well.[1]

The AJCC, 8th Ed., does not include any staging system for skin SCC, except for tumors of the vulva.[9]

((You may also add a synoptic report (see examples):)) 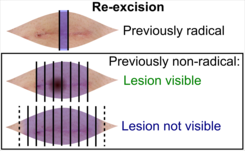