Multiple lesions of actinic keratosis on the scalp.

Lesions of actinic keratosis are typically ill-marginated, erythematous, scaling, and rough papules or patches. These will typically be found in areas displaying other signs of solar damage, such as atrophy, uneven pigmentation, and telangiectasias.[1] 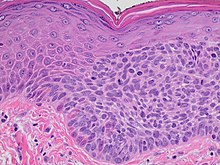 Normal skin (left) and actinic keratosis (right) with the defining characteristic of atypical basal keratinocytes that does not involve the full thickness of the epidermis.

By definition, actinic keratosis is confined to foci within the epidermis.[1]
it also generally has:[1]

Main differential diagnoses and their characteristics:[3]

Once a diagnosis of actinic keratosis is established, optionally characterize the degree of atypia into either mild, moderate or severe.

Example for the case in "Further workup":