From patholines.org
(Redirected from Blood smear)
Jump to navigation Jump to search

Author: Mikael Häggström [note 1]
Look at and comment separately on white blood cells, red blood cells and platelets. You generally don't need to aim for a perfect report, because for most purposes, a peripheral smear is a relatively simple screening test, and clinicians may opt to perform for example flow cytometry and/or a bone marrow biopsy if they want a better evaluation.

This is preferred for light microscopy of peripheral blood smears in order to achieve a very high magnification. First use low or medium power to center on suspicious cells, or where red or white blood cells are best appreciated. Put a drop of immersion oil on the location and switch to the immersion objective. Then, whenever there's oil on a slide, always think twice before switching between objectives so as to avoid getting oil on any of your dry objectives (which is a bit tedious to clean off).

When available, automatic quantification of mean corpuscular volume (MCV) and red blood cell (RBC) distribution width (RDW), usually as part of CBC panel, generally decides whether you will call the sample "normocytic" versus "microcytic"/"macrocytic" and/or "anisocytotic", even if it is not clearly visible in the microscope. If automated values are not available, compare RBC sizes to lymphocyte nuclei, which should normally be the same size. If mean corpuscular hemoglobin (MCH) and mean corpuscular hemoglobin concentration (MCHC) are normal, but you still see multiple RBCs with central pallor greater than 50% of the diameter, you can report it as "Increased central pallor", and you may add "indicating iron deficiency" if it is compatible with the clinical history.

Automated values can be graded as follows:[1]

Burr cells are distinguished from spur cells by having more equally distributed and rounded projections. They are usually artifactual. However, they may also be caused by renal insufficiency, so if this is present, a report may include "Occasional/Multiple echinocytes, consistent with renal insufficiency".

If CBC is performed, use count to determine whether platelets are "normal in number" or whether there is "thrombocytopenia" or "thrombocytosis". If no CBC, count platelets within a high power oil immersed field, which should normally be 8 to 20.

In thrombocytopenia from automatic counting, look in particular for: 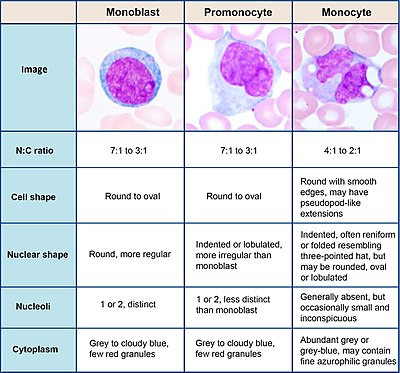