From patholines.org
(Redirected from Bone marrow biopsy)
Jump to navigation Jump to search

Using pliers or similar tool, squeeze some bone marrow from a rib.

Example in a normal case: 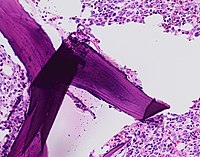 Histopathology of bone marrow with insufficient decalcification, wherein the bony trabeculae may get pushed by the microtome blade and plow away the cells of interest as displayed. To compensate, thicker sections may be taken, also making evaluation harder.

Find a location where bone marrow cells can be seen individually, preferably with minimal peripheral blood among them. Sometimes it is between trabeculae and sometimes it is in the surrounding area. Perform a differential count by counting 500 cells[1] and dividing the numbers by 5 to get their percentages. Don't count cells that don't have a cytoplasm or nucleus. If you receive several slides, count about the same number of cells from each slide, but don't count cells from slides where the cell types are more indistinct.

Ring sideroblast, defined by five or more perinuclear iron granules that encompass at least 1/3 of the nuclear circumference.[3]