Look for areas of fibrosis (Further information: Myocardial fibrosis ) or hemorrhage. Sample tissue from suspected areas, at least in cases where a diagnosis cannot be made from gross examination alone. 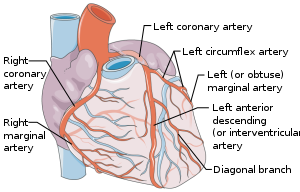 Make longitudinal (or transverse cuts at 3 mm intervals[2]) through:

Estimate the percentage of any significant stenosis or occlusion. Further information: Arteries

The presence of a totally occlusive thrombotic mass confers a diagnosis of likely sudden cardiac death death even in the absence of microscopically visible necrosis.[2]

Microscopy of the myocardium

Classify the topographic distribution of any myocardial infarction, if possible:

Example of a normal report: