Commonly presents as a colorectal polyp.

There is a separate article for the Grossing of minimally invasive colorectal surgery.

Depending on sample format:[1]

Example, for a gastrointestinal biopsy:

There are two main types of hyperplastic polyps, which have genetic differences, as well as different histologic structure, but no significant differences clinically:[2]

There is also a mucin-poor type with eosinophilic cytoplasm, which is rare.[2]

The basement membrane is frequently thickened.[2]

Elongated, fat crypts and little to no serration. Therefore, they may not be obvious without comparing to adjacent normal intestinal wall.[2]

They are filled with goblet cells, extending to surface, which commonly has a tufted appearance.[2]

Infrequently, the epithelium is misplacement into the submucosa. Such polyps have been termed "inverted hyperplastic polyps". They appear to be restricted to the sigmoid colon and rectum. The misplaced epithelium is mucin-depleted , similar to the basal 1/3 of the polyp. The misplacement is accompanied by the lamina propria, and is continuous with overlying polyp through a gap in the muscularis mucosae. It may require slices at multiple levels to demonstrate microscopically.[2]

In such cases adjacent hemorrhage and hemosiderin deposition is common. Collagen type IV stain will have a strong continuous staining around nests.[2]

Nuclei are small, regular, round and basal in the luminal half of the crypts, most reliably evaluated near the luminal surface.[2]

There are proliferative changes at the base of crypts, where nuclei are enlarged, the nucleus/cytoplasm ratio is elevated.[2]

The main differential diagnosis for a hyperplastic polyp is adenoma, which generally display:[2] 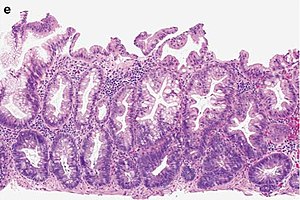 If both latter findings are present, it is almost always a SSA. Other features causing a suspicion for sessile serrated adenoma are:[2]