Dealing with Internet denialists and their exams They take pride in for example memorizing the chromosome locations of even rare mutations, but when being called in for a frozen section of even relatively common specimens such as brain, lung or skin tissues, they may not know how to differentiate even the most common 90% of diagnoses.

An Internet denialist who has memorized something may assume that pathology trainees should memorize it as well, and entire lectures may largely consist of rants of such items. In reality, when something is encountered and looked up something enough times, it will generally get memorized. It is generally more efficient to let time tell which situations will be common versus uncommon, rather than trying to memorize knowledge for even uncommon situations.

An internet denialist exam is basically any exam wherein the examiner does not have access to the Internet, and typically is not allowed to ask colleagues either. Since these two resources are fundamental in everyday practice, such exams are thereby of a different dimension compared to everyday pathology practice.

For a multiple choice exam like the American boards, you don't actually need to know the answer, but just have a feeling of what is the most likely answer among the choices.

Within an hour after removal from the body,[1] tissue samples should generally be placed in vessels with the correct fixing solution, with a volume that allows them to lie freely in the solution.[2] The standard fixation fluid is generally 10% neutral buffered formalin, which is roughly equivalent to 4% formaldehyde.[3]

When sampling sections to submit for microscopic examination, whenever you sample from something that looks abnormal, generally try to also sample from the same type of tissue that looks normal.[notes 5] 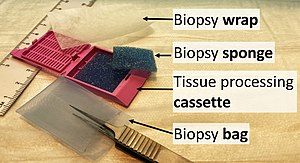 The same word used describing the certainty of findings can refer various probabilities, differing between pathologists as well as clinical situations. The following is a suggestion of words, in an attempt to sort them from most to least probable:

For findings and diagnoses, is preferable to write "negative for..." rather than "no..." to emphasize the possibility of false negative findings.

The information contained in the reporting sections in Patholines assume that the clinician has requested the exam for the topic of the article at hand, but should be tailored to any particular questions or requests by the clinician. Any relevant findings beyond the issues or questions raised by the clinician should also be mentioned.

If a certain grammatical rule has a risk of making the report less clear to the reader, ignore it.

Restrict acronyms/abbreviations to those who are certainly well known among all doctors, such as "cm".[notes 2]

In skin cancers, "peripheral" or "radial" margins are preferred rather than "lateral".[9][notes 3]